August 2021 - Prostate Charity Gig Row training started for event on Sunday 23 October: Burnham on Sea to Bridgwater and back to Combwich (21 miles). 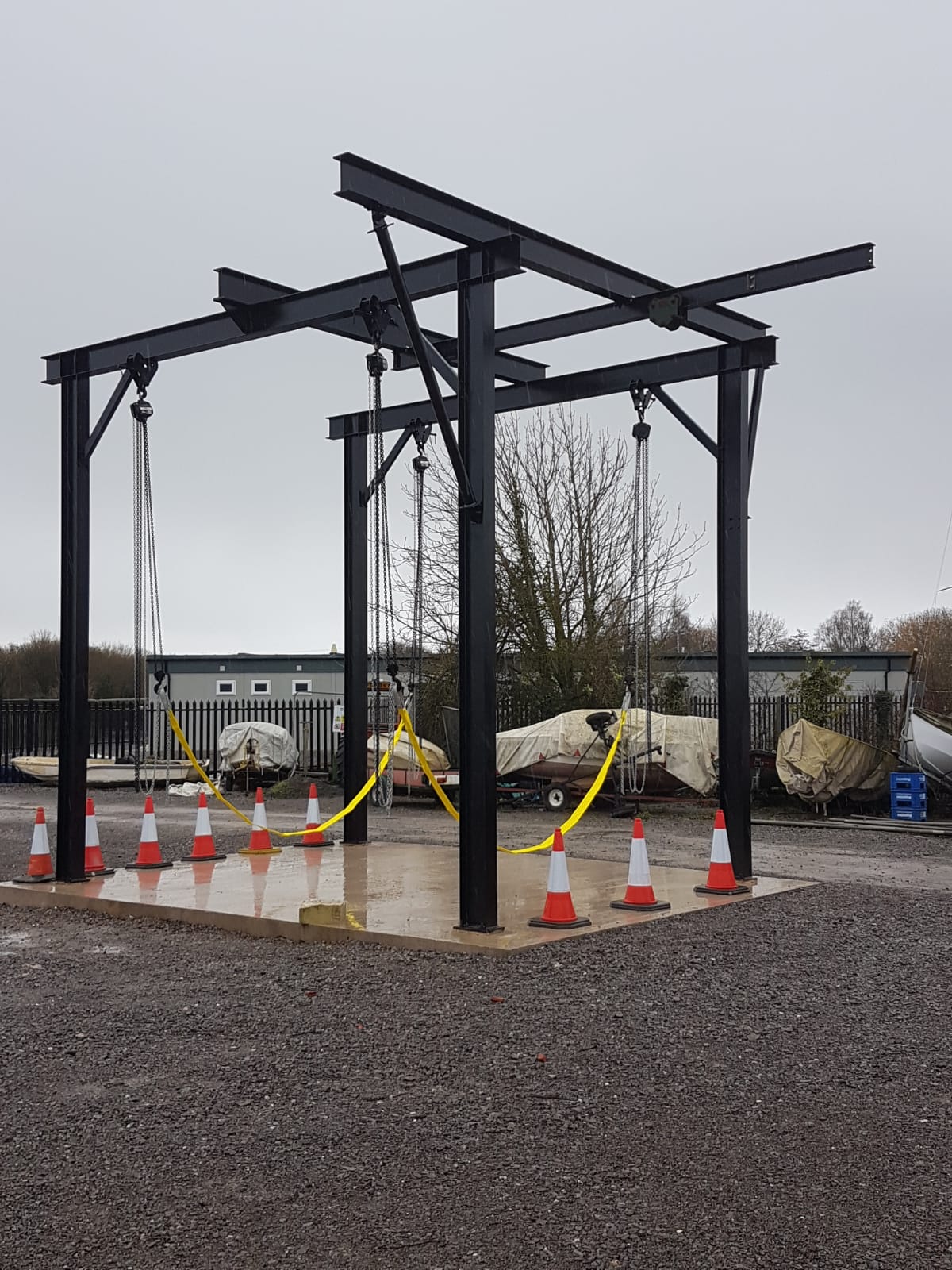 April 2019 - Our new wooden gig 'Warlock' was completed on time in May. We also have a new logo for the gig section courtesy of our local artist Tom Jacobs: 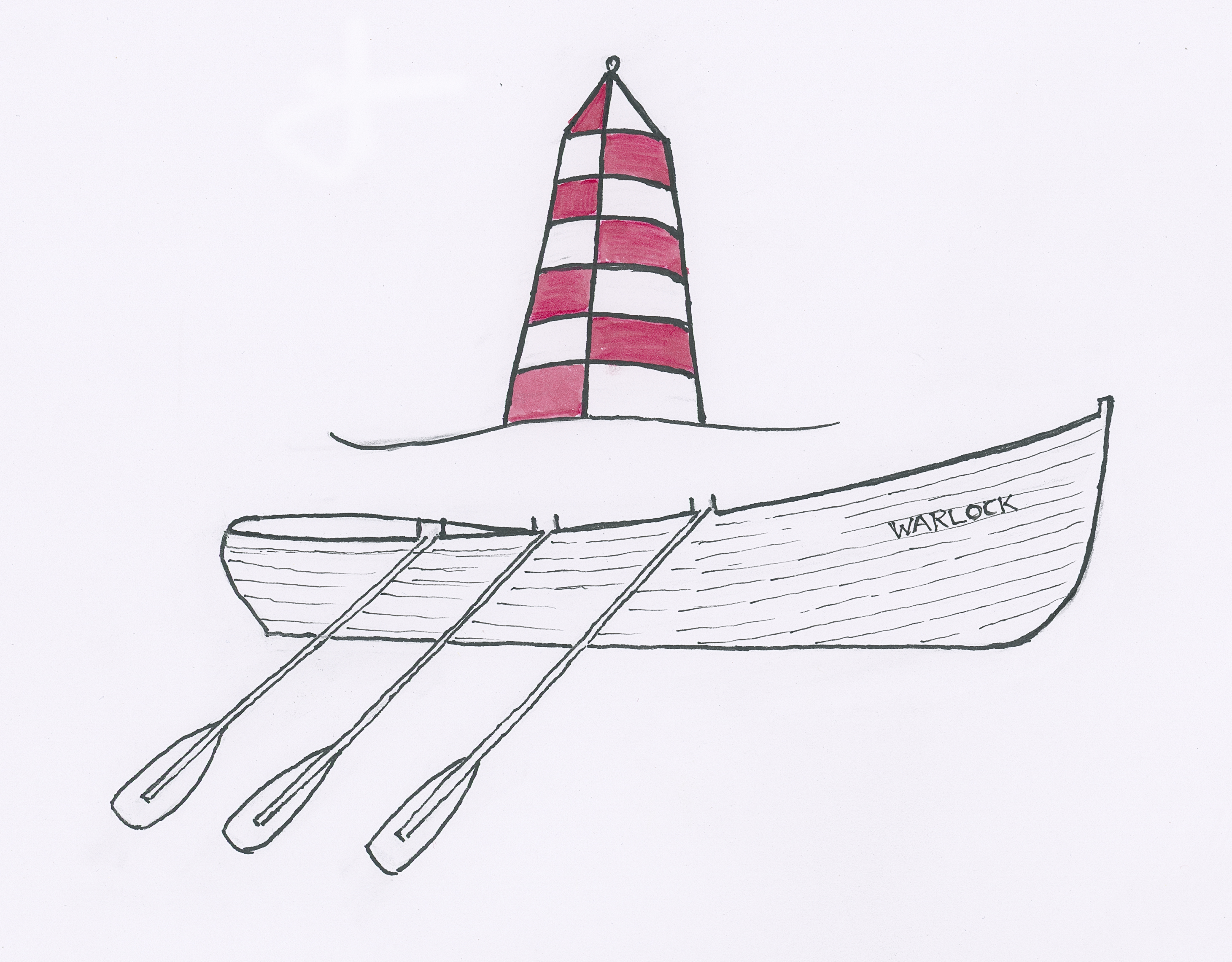 Tom has also kindly agreed that we can use this without his permission so please feel free use it where ever appropriate.

December 2018 - Thanks to Pete Evans, Station Manager at Hinkley B we now have a defibrillator installed on the clubhouse outside wall. First Aid training, including the use of the defib', will also be provided by Hinkley B at a date to be confirmed aerly in the New Year. In the meantime the device can be accessed from the secure cabinet using the code on the bosun's notice board inside or by calling 999. Essentially it is fully automatic and the instructions are played to you once you press the green start button. Obviously it needs to be operated away from the river and water. 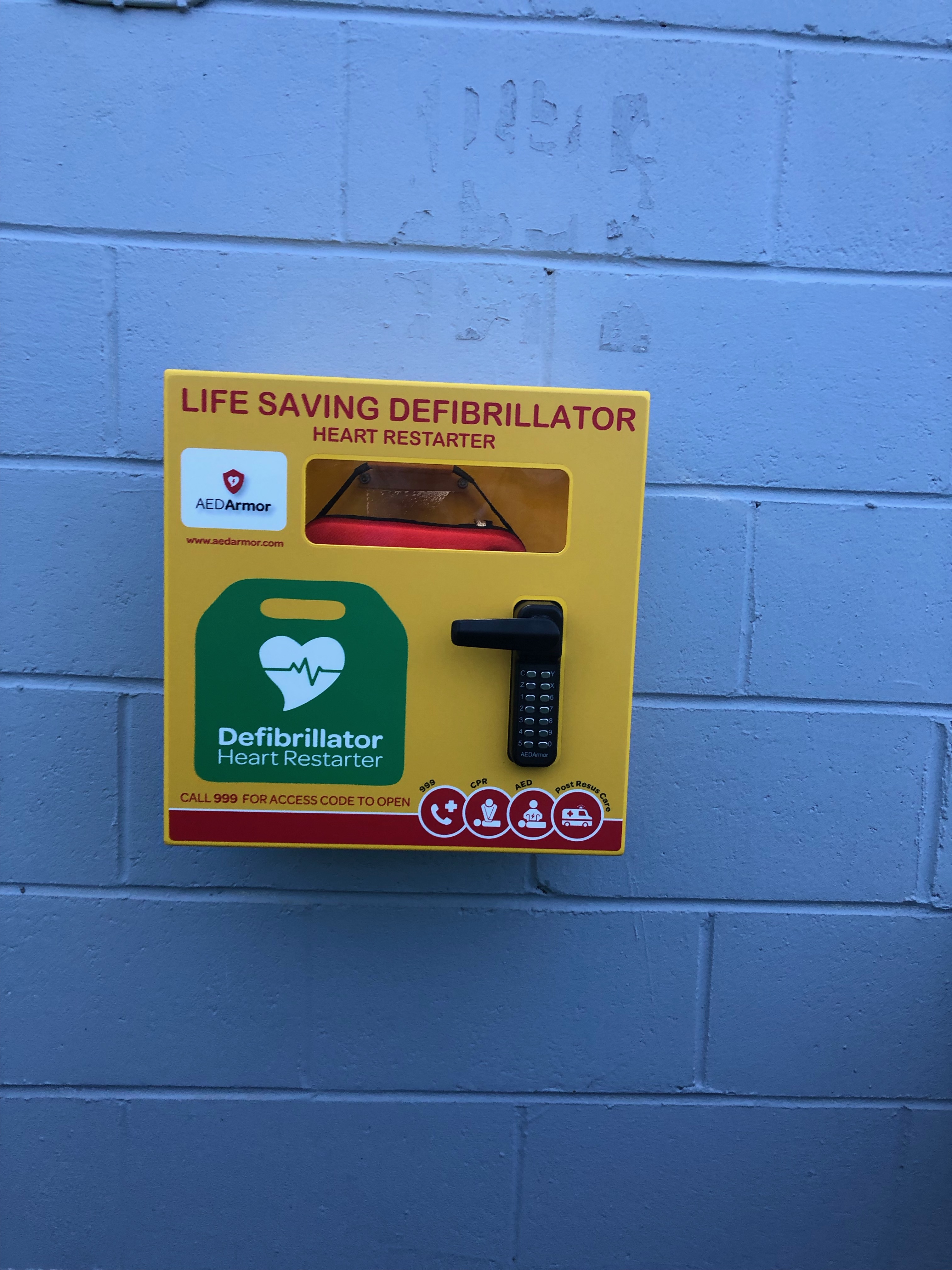 November 2018  - Great news! we have just been awarded a grant from the Somerset Community Foundation for the provision of a new Wooden Gig and equipment.

'HPC Community Fund is managed by Somerset Community Foundation to help local communities mitigate the impacts of Hinkley Point C and maximise the opportunities that arise from the development for the communities (in Somerset) through schemes, measures and projects which promote the economic, social or environmental well-being of those communities and enhance their quality of life.'

Also we are also very grateful to Magnox who have awarded us a grant for VHF radios for operating the Gigs. 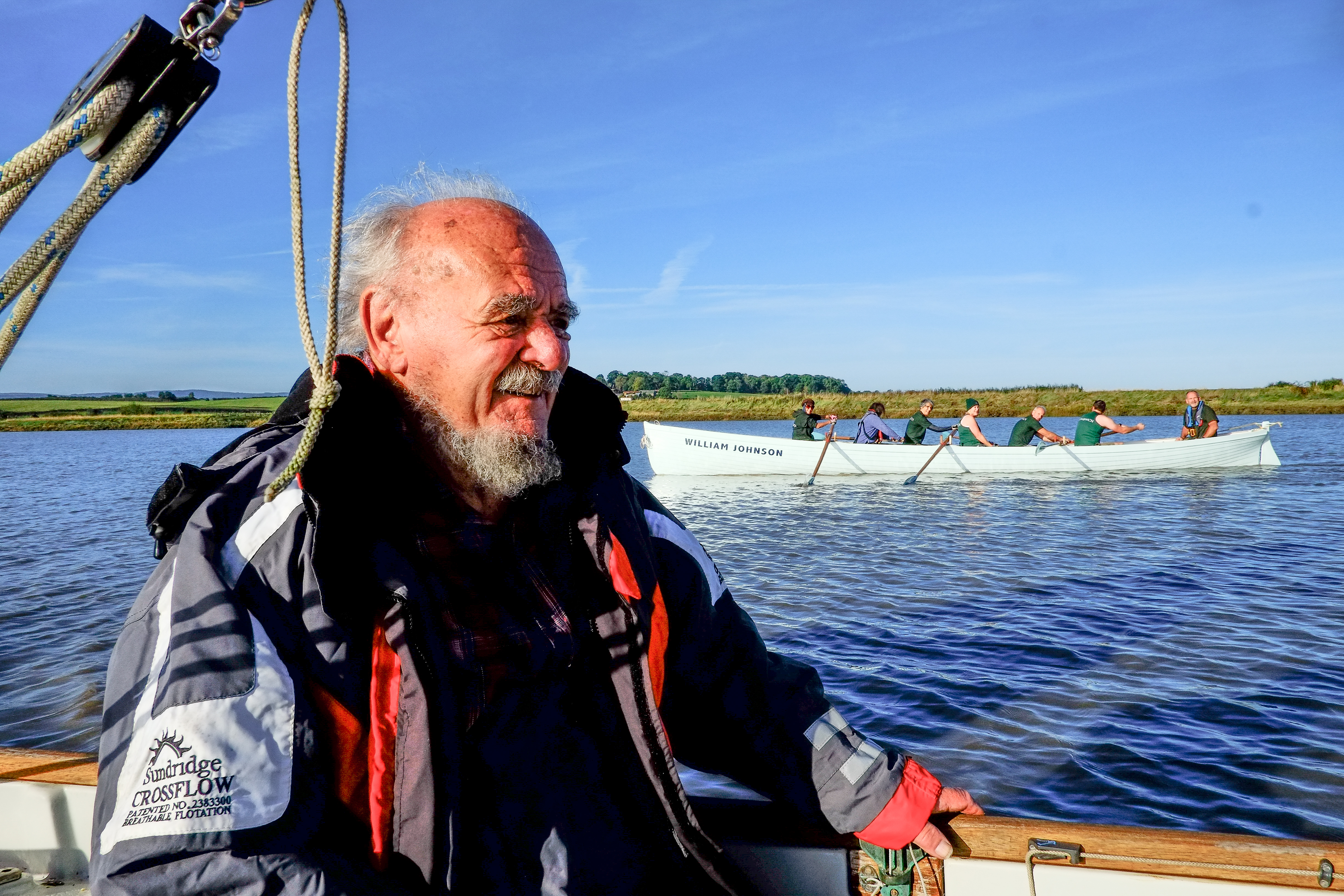 Since we don’t see a lot of our boating members on a regular basis the committee decided to bring everybody up to date with this newsletter.

In March this committee was elected at the AGM for the coming year and set about a program to clean up the club premises and make the place a much more pleasant place to be. Hopefully with the improvements made to the clubhouse internally and painting the outside you can see an improvement.

The Bosun Mark Lowther has worked tirelessly to clean up the yard and several trailer loads of scrap was sold and a couple of skip loads of rubbish removed.

In April the club took delivery of a Fibreglass Training Gig that was the result of much work in gaining funding from the HPC Community Fundand we invited existing and new members to join and go rowing. The boat was unveiled in a naming ceremony and this gained the club much publicity via the press and radio.

To date we have about 40 members rowing regularly and the club due to demand has had to lease another boat to accommodate them all. The leased boat the ‘Spirit of Rame’ is a traditional wooden Gig and allows us to participate in race events. The club is entered into an endurance race on the 13th October from Bristol to Clevedon and will make its public debut.

The Rowers are a very friendly bunch and anyone wanting to have a go should come along and give it a try.

The rowing group continues to grow steadily and are being coached and trained by experienced coaches and the club will hopefully be out on the Regatta circuit next year representing both the club and the Parish. The rowers and club now have a set of racing clothing that is available to all via the JUAL website. It includes Vests, Shirts, Shorts, Polo shirts, Hoodies and Jackets. If you would like any of the range which currently has the words ‘GIG ROWER’ under the club logo you can specify without the gig rower words.

The committee and the local Parish are extremely pleased with the way the rowing has taken off and it provides a fantastic way of keeping fit as well as a very sociable group that promotes well-being locally. The club has rowers ranging in age from 11 to 73.

The club has seen its membership grow this year from around 50 to more than 90 so far. A good number of this influx are rowers but we have also attracted several new boating members too. The pleasing thing is the average member age is now looking a lot more respectable and we have reversed the decline in numbers.

At the end of May the club hosted the South West Ski club regional event where we had 10 extremely fast ski boats racing on the river. Speeds were clocked at over 75mph and we were blessed with great weather and the event was a fantastic success and again promoted the club locally. The skiers have asked us to host an event again next year and we will be working with then to fit it into the calendar.

The committee has sanctioned and undertaken a raft of projects to not only improve the look of the place but also the facilities available to all.

The committee has been working closely with the project team and contractor that will be undertaking the wharf refurbishment early next year. We are extremely hopeful that the club will benefit from several major improvements coming our way including:

Rise and Fall pontoon alongside the slipway to have power and water.

The slipway is to be re-laid at a less steep angle and further into the river.

Provision of a new 10-ton winch for the slipway.

We will be losing some land alongside the river for the new access road but getting land at the rear of the club that we hope will be slightly larger than that lost.

There will be major upheaval during the works which are likely to last at least 18 months but we are hopeful that this can be kept to a minimum impact on the club activities.

Boats displaced from the moorings will not be back in the Pill until the works are completed and the mooring chains are replaced.

The committee can report that the clubs finances are in as good a shape as they have ever been despite all the works we have undertaken and delivered. We have some more improvements that are under consideration for next year and would like to invite suggestions for consideration.

There has been a lot of change this year not least the fact that we now have a very active rowing section. It’s natural to resist change but the club was in danger of becoming stagnant. To everyone’s surprise the Gig initiative has turned it around and the increase in membership is extremely welcome and timely. There are still many challenges ahead not least the Civil Engineering works but rest assured we have your best interests at heart and whilst we appreciate we can never satisfy everyone all of the time please work with us to keep improving our club for the future.

14 August  The website has been revamped and now under our direct control. The site was inspired by Harlequin Creative so we are greatful to them for designing the original site and support transfering the domain to our own web space. No doubt the site could do with some proof reading and ideas, especially photos, so if you have spotted any typos or have something to contribute please contact Bill Edwards.

August. Due to an almost overwhelming interest in trying out the recently purchased Gig the Club has rented a wooden Gig to offer more 'seats' on Gigs and thus maintain interest. It also enables us to compete which is an attractive proposition for a lot of the new members who have joined specifically to row. There is no doubt that the Gig project has been a huge success and interestingly people are turning out in all weather. Moreover, club membership has almost doubled in the last few months!